The Joy of making Baguettes

I love making bread. I've been making it since I was very young. It's taken me a long time to make really good baguettes. I always had trouble getting the crusts really, really crunchy and the center soft.

Here's how I finally got it to work. I started with two packages of yeast. I put them in a bowl and added 1/4 cup of very warm (90-100 degrees) water and let it proof. After about 3 minutes, I added a teaspoon of sugar to help the yeast grow. I added 3/4 cup more of the warm water and started adding flour. After about 2 cups of flour, I added 1 teaspoon of salt. I guess you could add more, but I don't like things too salty. Anyway,add another cup of flour and turn the dough onto a board and start kneading. I kneaded the dough for about 20 minutes. Now this may seem like a long time of doing nothing, but I find it peaceful to just be working on the dough. (It could be mixed in a mixer instead.) As you're kneading, only add enough flour to keep the dough from sticking to the board and to your hands. By the way, if the board starts slipping on the counter, put a damp towel under it. Clean the bowl you mixed in and add a little oil to the bowl. Place the dough into the bowl and then turn it over so it has oil on top. Let it rise for an hour or until it's double in size.

Punch the dough down and knead it a couple of time.

Divided the dough into three equal pieces. I rolled each one into a flat kinda rectangle. Then I rolled the rectangles up cigar-like and placed it into this really neat baguette pan I have. They don't have to bee too neat as they straighten out as they rise. Let them rise for 30-45 minutes until they double in size. If you like the bread to have slits in it, cut it at a diagonal now - I generally don't. 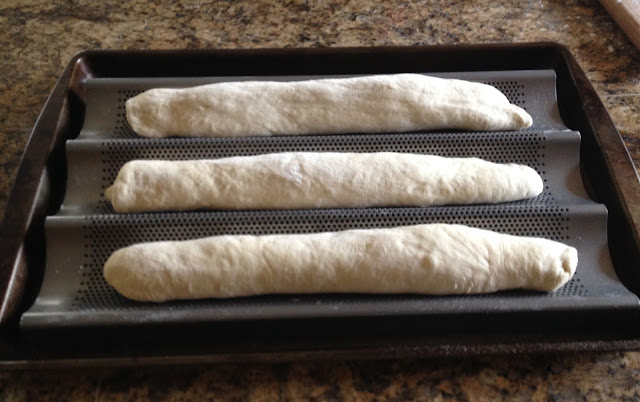 Preheat the oven to 400 degrees. Once the baguettes are in the oven, use a clean spray bottle that is only used for food, and spray the dough and the inside of the oven. Don't soak it, just lightly spray it. Set a timer for 5 minutes and spray again. I sprayed like this every 5 minutes until the bread was golden brown and done (about 25 minutes). It will sound hollow when you tap on the crust when it's done.

Here's the best reason to make bread - it tastes awesome. The two in the back weren't cut, but you can see the slits in the one of the bread board. 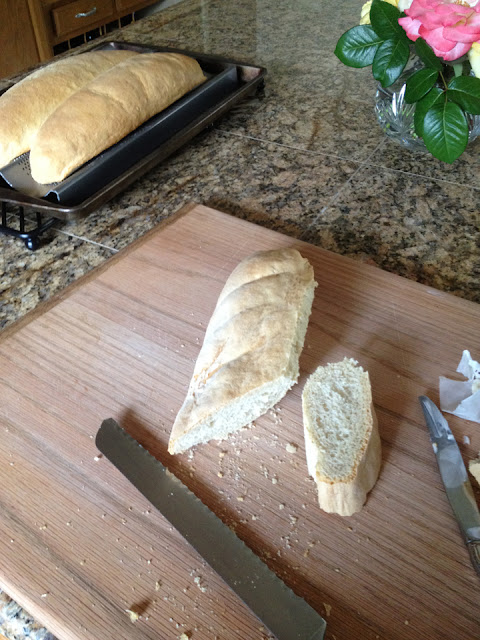 Posted by Unknown at 3:16 PM No comments: